Discovering communities in a network through network clustering 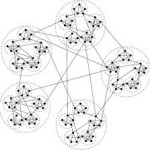 Some members in a network (be it a physical or a virtual one) may have a stronger relationship with some of the other members. Inside a network there are communities, whose members have stronger connections inside their community rather than outside of it. The detection of such communities is a relevant task in network analysis and is achieved through network clustering, e.g., decomposing the network into clusters (the communities). In the past, this task has typically been accomplished on the basis of binary information: a member of the network is either connected or non-connected to another member (and non-connection is a sign, but not the certainty, of them belonging to different communities). However, binary information does not tell us anything about the intensity of the relationship of those members. Two members may be have such a weak relationship that they do not belong to the same community.