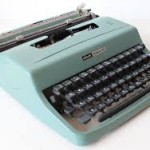 Last week, I was giving a class in my course on Computer Science for Foreign Languages, when, to justify the use of translation memories as an essential aid for the professional translator, I had to provide some figures about the related efficiency increase (we are quants anyway…). Producers of translation memory software claim that it can boost productivity by even 70%. Is that claim justified?

Actually, a lot of the time a professional spends on a translation project is due to actually retyping the text. It looks like an ultimate limit to the translation speed is given by the typing speed of the translator. I tried on the spot to make a back-of-the-envelope calculation.

According to Wikipedia an average professional typist types usually in speeds of 50 to 80 words per minute, while a two-finger typists reaches 27 words per minute when copying text. I guess that a professional translator can be assumed to stay somewhat in the middle and so reaches roughly 50 words per minute. But, in addition to typing he will also have to take even a brief look at the sentence and drafting the translation in his mind. Let's assume that the translation-at-a-glance activity takes as much time as typing. We end up with a capability of 25 words per minute. At 250 words per page, that means that roughly 10 minutes are needed to translate a single page, or 6 pages per hour. How many pages can that translator translate on a single day? Well, stretching that reasoning to the limit is a bit risky, because we have to consider a lot of activities (in addition to the transition difficulties themselves) that are anyway part of the daily life of a translator: management activities, such as contacting new potential customers, dealing with existing customers, family commitments, daily life chores, etc. But that simple example shows that any tool that slashes down the time needed to type is actually a great aid.