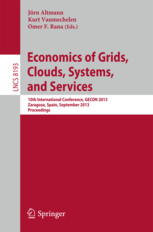 Last month I have attended the GECON 2013 conference. The long name of the conference is The 10th International Conference on Economics of Grids, Clouds, Systems, and Services. Very well hosted by the colleagues at the University of Zaragoza in Spain, GECON is one of the few conferences dedicated to the intersection of economics, networking, and computer science (my foremost field of research). This year's event has been jointly chaired by Jörn Altmann, Kurt Vanmechelen, Omer F. Rana, and Jose Angel Bañares. The proceedings have been published by Springer in the well known LNCS series (volume 8193). The conference has increased its coverage, traditionally focused on grids and clouds, to include a wider array of topics. The overall numbers of papers accepted for presentation has been 20, organized around the following 7 sessions: Business model, Energy Consumption, Resource allocation, Work in progress on resource allocation, Work in progress on pricing, Quality of service, Work in progress on utility and ROI modeling. The inclusion of Work in progress sessions has allowed to increase somewhat the number of presentations with respect to the latest editions.

A significant part of the papers (6 out of 20) were devoted to resource management in a typical cloud computing context, but interesting developments were also described about the economics of SaaS, IaaS, and security investments. Having reached its tenth edition, the conference has already secured its place in the academic environment, with a steady community of supporting researchers. A sure choice for anybody interested in the economics of the growing area of cloud services and infrastructures.