The risk of  concentration in the hands of one or few companies is a continuing issue in today's markets.  While the newspapers have carefully followed the European Union Microsoft competition case or the dominance of Google in the search market, the same attention has not been devoted to the market of mobile operating systems, where a strongly dominant position has emerged in the latest years. In order to explore such a case, we have collected the data made available by Gartner, which performs a review of the mobile market every quarter. As a measure of the degree of concentration, we have adopted the well established Hirschmann-Herfindahl Index (HHI), whose normalized value lies between 0 and 1: higher values signal a stronger concentration of the market, with 1 corresponding to a perfect monopoly. 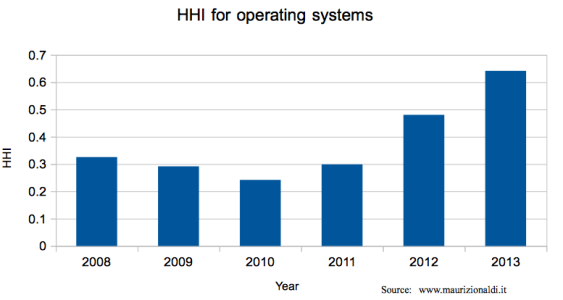 As can be seen in the accompanying picture, the HHI index for mobile operating systems is really high. Just to put things into perspective, we recall that the guidelines jointly published in UK  by the Competition Commission and the Office of Fair Trading (in line with the European Commission’s guidelines on the assessment of mergers) suggest that a market with an HHI exceeding 0.1 may be regarded as concentrated and any market with an HHI exceeding 0.2 as highly concentrated. The HHI in excess of 0.6 resulting after the third quarter of 2013 is therefore a very large figure. The growing trend observed after 2010, inverting the trend after the not so small values of 2008 and 2009, represent the gradual ascent of Android, which has overtaken the former market ruler Symbian (which had a 52% share of the market back in 2008). Actually, the strong presence of Symbian had already pushed the HHI to the alarming figure of 0.32. The combination of Symbian's descent and the growing market power of Android had lowered the HHI down 0.24. However, as of today, Android's strong grip on the mobile operating system is certified by its share, which is now close to 80%.

The same level of concentration risk does not appear to be present in the market for smartphones, whose HHI over the first three quarters of 2013 is anyway the not-so-small 0.28. Lower figures can be observed for mobile devices, where the fall of Nokia (which held a 38% share of the market in 2008) has led the HHI in a quite stable range between 0.1 and 0.21.

Shall we see anti-concentration measures against Android as has been the case for Microsoft and Google itself for the search market? Well, it looks like the case is already under close scrutiny…in China, after EU's first move