SMS messages on the declining path, or are they? 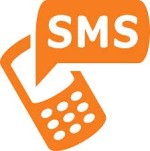 A few months have passed since Neelie Kroes' tweet announcing chat apps overtaking SMS. It's time to take a thorough look at the phenomenon, and crunch some numbers.

It's official: chat apps have overtaken SMS globally. The cash cow is dying. Time for telcos to wake up & smell the data coffee.

According to the report recently released by Portio research, the SMS traffic is about to reach its peak, after a stagnation phase started in 2009 and extending through 2015. They forecast that in 2015 8.3 trillion SMS messages will be sent over the world. After that date, the service will start its downward trend. Though this forecast may envision still two years of continuing growth for SMS, we must take into account what's happening in the OTT (Over The Top) market, i.e., those applications providing a messaging service over the Internet without the direct involvement of the network operator. 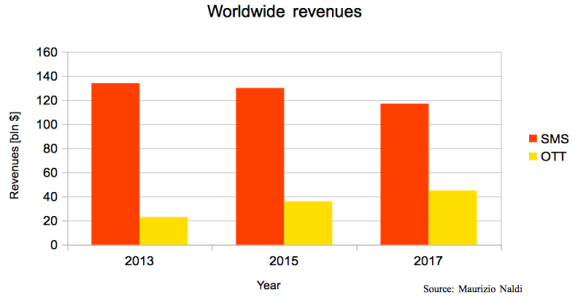 We are talking about Whatsapp, Viber, and the likes, which deserve the chapter "WhatApp-ening" in the 1H2013 report from Sandvine. By processing some data provided again by Portio research, we observe that, while the traffic is expected to keep on growing till 2015, the revenues from SMS are starting to fall. On the other hand, the revenues from OTT services, though still quite lower than those from SMS, are closing the gap, with a forecast compound annual growth rate (CAGR) of 25.1% in 2013-2015 and 11.8% in 2015-2017.

By digging a bit further, we find however that there is something that SMS and OTT apps share. 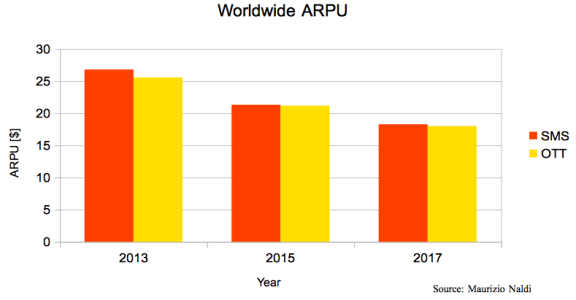 We have computed the ARPU as resulting from the raw forecasts of Portio Research. When looking at the resulting picture, we observe two things: 1) the ARPU is going down for both; 2) the ARPU of OTT apps is quite close to that of SMS. The first phenomena is typical of either dying services (and that may be the case for SMS) or services expanding its customer base to include less spending customers (that may be the case for OTT). The second observation may mean that the switch from SMS to Whatsapp and similar services is not a market loss on the overall, but just a shift of money from the network providers' pockets to those of app providers. 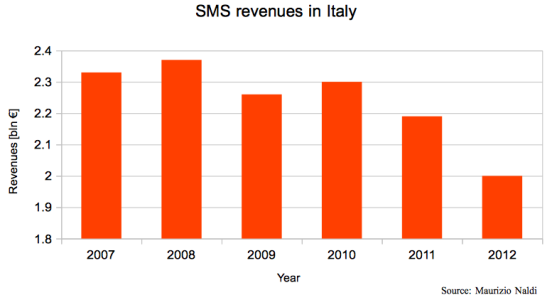 Anyway, a worldwide look may hide contrasting phenomena, compensating figures from mature and developing markets. If we take a look at a mature market such as the Italian one, the story is a bit different. According to the figures reported year by year by the Italian regulatory authority AGCOM, revenues due to SMS messages are already on a descending path. As you can see in the attached graph (pertaining to the Italian market), revenues are down to 2 billion euros from the maximum of 2.37 billion euros in 2008. The decline is even sharper if we consider the weight of SMS revenues in the overall data services figure, which is experiencing a continuing downfall, from 60% in 2006 to 42.4% in 2012.

The takeover of the messaging market by chat apps looks inevitable. But the process is going to take some time. And SMS messages will remain THE messaging tool for all those who do not own a smartphone. Network providers have all the time to develop their own chat apps to replace SMS.

This entry was posted in Traffic analysis and tagged messaging services, sms, whatsapp. Bookmark the permalink.